A Plain Tiger amidst the weeds - common, yet exceptional 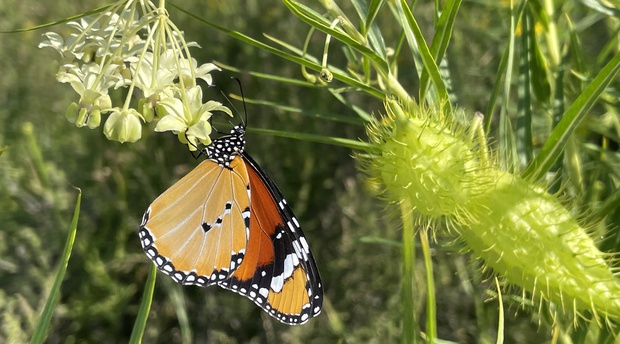 Facts about The Plain Tiger Butterfly, found in abundance around Gkhui Gkhui River Lodge and it's incredible life.

The Plain Tiger butterfly (Danaus chrysippus) formerly African Monarch, is a common sight with its laid back flight as it relies on the fact that the bright aposematic (“stay away/warning”) colouration would warn predators of its unpalitability.  The latter being caused by the poisonous plants (the milkweeds in particular) they feed on.  This is so effective that the Plain Tiger is mimicked by other butterfly species, that are completely harmless, to avoid predation.

The courtship behaviour of them is fascinating where the male attracts the female with a pheromone secreted by a gland situated below a small pouch (which is only visible as two small black dots) on his wings.  Like small wands the male uses the hair pencils with little brushes in his abdomen to distribute small particles of the pheromone by flying over the female to induce her to sit. The whole life cycle from laying eggs, larvae, pupae to a butterfly takes less than 3 weeks.

The caterpillars (which are also unpalatable) are also rather conspicious with their striking white, black and yellow colours.

The Milkweed plant, which is originally from Australia, is often referred to as a “weed” and is a light green shrub of approximately a 1-2m high with conspicious soft-spiked fruit-capsules and drooping cream-coloured flowers.

The Milkweed plant (*Asclepias fruticosa one of the many species in the genus), was named after the *Greek God of medicine, due to its several medicinal properties.  The plant yields a milky latex when a piece is broken off, often an indication of poisonous plants, which in this case is crystalline glucoside and can be lethal.  The sap in large quantities causes mainly gastro-enteritis, but is reputedly very effective in treating warts if smeared on regularly and an infusion of the plant, is used to treat diarrhoea and other stomach problems.

My initial fascination with the plant was for the multiple other uses it posesses - from the fibres that can be used like a rope to the stuffing of mattrasses and pillows in the Second World War.  It can also be used to keep moles and molerats abay by putting cut pieces into their holes.

The other common name “Wild Cotton” refers to the white tufts of silky hairs attached to their seeds, which only becomes visible when the pods dry out and split open.

In the past the silky threads that contain 81.5% cellulose were used in the antique “tonteldoos” lamps instead of the cloths. The plant got the nickname as “Tontelbos” meaning “Tinder bush”.  The fibres can be used similar to guncotton (which is cellulose nitrate) and reputably make great firelighters.

Both the butterfly and plant are often overseen due to being so common, yet they fall nothing short of exceptional! 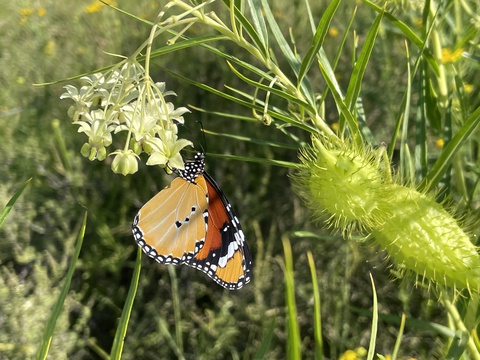 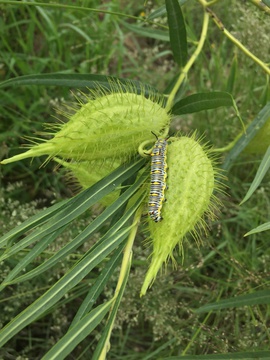